In the city of Bandung itself, there are several modes of public transportation that serve routes both within the city and across cities around the Greater Bandung area. This mode of transportation is served by city transportation (angkot), city buses (DAMRI), Trans Metro Bandung (TMB), and Diesel Rail Train (KRD). 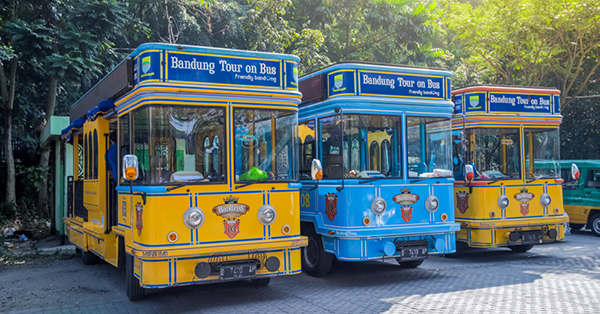 For transportation within the city, the people of Bandung usually use city transportation or what is more
familiarly called angkot. In addition, city buses and taxis are also a means of transportation in this
city. Meanwhile, as an intercity and provincial bus terminal in this city, there are Leuwipanjang terminal
for the west route and the Cicaheum terminal for the east route. Point-to-point travel between Bandung-
Jakarta has its own pool, but all travel also has a pool at the Pasteur Channel, the road to the Bandung-
Jakarta toll road. On September 24, 2009, TMB (Trans Metro Bandung) officially started operating, despite
protests from local angkot drivers. This TMB is a project of the Bandung city government in providing mass
transportation services at low prices, guaranteed facilities and comfort and on time to the destination.

The city of Bandung has an airport called Husein Sastranegara Airport to connect this city with several
other cities in Indonesia such as Jakarta, Surabaya, Denpasar, Manado, Yogyakarta, Batam, Mataram,
Makassar, Bandar Lampung, Palembang, Pangkalpinang, Semarang, and Medan. As for overseas routes, including
Malaysia, Singapore, Thailand and Brunei Darussalam.

The city of Bandung also has main train stations, namely Bandung Station and Kiaracondong Station. In
addition to these 2 stations, there are 5 other train stations, such as Gedebage (only for containers),
Cimindi, Andir, Ciroyom and Cikudapateuh.